How to Kill a Dolphin, Taiji Style 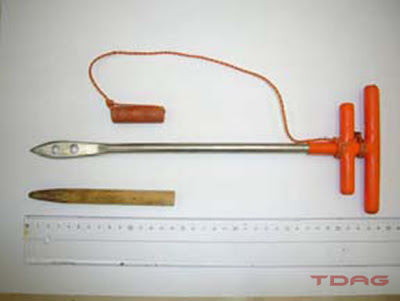 This tool is used to sever the spinal chord of the dolphin, it paralyses but does it kill? the cork on the string is used in case the tool is dropped so it can be retrieved and that piece of wood? Well that is jammed into the hole made by the tool to stop the bleeding and make sure that the waters do not turn the red colour we are so used to seeing in pictures of previous hunts. 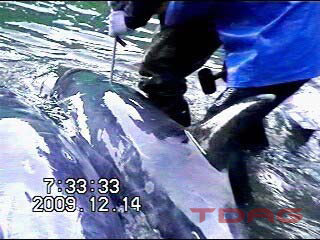 The Taiji Dolphin Action Group is making further inquires into what the Taiji Fishermens Unions claims is a new "more humane" way of killing. Where did this method of killing dolphins (less the plug) come from? Well let me tell you where these people got their inspiration - The Faroe Islands!

It is not only those of us who oppose the slaughter of of our beautiful dolphin friends that are united, apparently Taiji and the Faroes are not only practicing the slaughter they are an inspiration to each other.

Mark B
co-founder TDAG
Posted by TAG at 7:17 PM