The next stage begins. 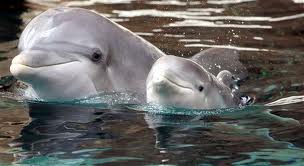 When the hunt is on and the dolphins haven't been netted yet, I hold a vision of escape: fast, far and free. Some dolphins are bound to escape. May they tell the tale to other dolphins to keep away from Taiji as scientists say they can.

When dolphins get roped into the Cove, it is time for the next stage: make the call to consulates and embassies and the people in charge. Get creative. Visit the embassies...remember the names of the people you talk with or meet with.

With a baby pilot whale in the Cove confirmed, our next step is clear. Please call any Japanese outlet and demand that at least the baby and his mother be saved. Killing a baby or pregnant female, even in a hunt, is murder.

This approach focus was suggested by a Japanese man in Taiji when Ric O'Barry and I showed The Cove in his home to him and his guests. He recommended an emotion approach after seeing the scene of the bloody baby dolphin swimming across the nets to diver Mandy-Rae Cruickshank "Japanese love dolphins; use this love to save them", he said.

Holding the pod overnight is rare now. It is an unusual opportunity. Please make calls every hour for the next 20 hours. Babies are the heart string. Play it!

Ask if there are any pregnant females. If Embassy officials don't know the answer, ask them to find out, you'll call back. Give them the numbers of the Mayor and the Taiji union in charge of the hunt. Give them the names.


Some may question the survivability of baby dolphins, and their mothers, pregnant females, and perhaps a few males. Dolphin scientist Diana Reiss told me that it is by no means certain that they will die. It is more possible that they will contact other dolphins and warn them! Baby dolphins have been released before with other remaining members of their pod when the pressure was on. Let's apply pressure any way we can!


Dolphin lovers, please place contact lists in the replies section in this document. Thank you.

For the baby dolphins and for all humanity!

Posted by Steven Thompson at 2:13 AM 4 comments:

We Make Dolphins the Japanese Agenda

I got a telephone call today from a Japanese friend at the Cove today. Ric O'Barry and I showed the Cove (watch for free) at the home of our mutual friends in Taiji four years ago. We still have security issues for the Japanese. Violence is possible. Town shunning is par for the course. It's not easy to challenge the tradition of the-way-it's-always-been-done.

My friend cannot easily contact Sea Shepherd or Save Japan Dolphin activists directly. He has a message for them--he's happy you are here. Many Taiji people are happy you are here! The hunt gives their town a bad reputation. He is on good speaking terms with people in Taiji including hunters. It's a small friendly town.

The message to Cove Guardian, Melissa Sehgal, and Cove Monitor Tim Burns, is that the hunters are upset...he used the phrase "mecha okotteiru" (damn angry). Being here works. Thank you for coming! We could arrange a meeting sometime when the undercover police escort stops tailing you or you slip away.

The hunters get together at the Isana izakaya (bar) after their hands are clean. Deiter Hagmann with Atlantic Blue, got some good footage in the bar and we observed the Korean live dolphin export party when we got one of our tires sabotaged. The hunters also lounge around outside the union smoking cigarettes after they get cleaned up. They are happy to talk to people walking by, including non-Japanese. I have shared potato chips with them. They usually love to debate. Really. It's always a bit of rowdy fun. But today was different.

The media coverage...the heavy and constant police presence...the town meeting...Taiji will feel under siege for 6 months and today is just the second day. The news last night (Sept. 1, 2012) in Japan prime time covered the opening of dolphin killing season. The news anchor seemed more concerned about Sea Shepherd than the peacefully assembled Save Japan Dolphin Activists. Sea Shepherd has become the buzz word for those attacking Japanese "culture".

One well-known hunter, SHIMETANI Kazutoyo (aka Private Space), who helps manage the day to day hunt and butchery, had no idea who he was talking to. He was angry. he even uses the F-word, in English of course. I interviewed him when he was following me around with a video camera when I was alone at the Cove. When I turned my camera off, he started talking. Shimetani san really is a nice guy. He has a good heart. He isn't evil. His soul is not corrupted. I think he is just following tradition, and extremely misguided.

I hope he doesn't have a heart attack. I hope he sees the light and saves baby dolphins and pregnant females at least.

The hunters have gone back after killing and released babies, pregnant females, and a few males when we protested two years ago. It's a time consuming reverse process of banging the poles and pushing frighted dolphins out near international waters. Of course they may be intelligent and warn other dolphins to stay away (I think they did...the hunt numbers are down as a result). When the hunters do make the decision not kill every male, female, and baby, Taiji will not be known as the dolphin baby killing capital of Japan. There are more options for Taiji than following tradition blindly. Please demand that that the dolphins save the babies and pregnant females. This is the strategy recommended to us by trusted Japanese people.

I recommend a letter writing campaign too--it has certainly worked for Amnesy International: Identify the people doing bad things, and inundate them with mail. The wonderful thing about post offices is that they will hand deliver your message. These are the men most responsible for dolphin deaths in Japan.

Let's all write a letter every week to:


Consulates and Embassies
The staff at these offices exist to answer our questions. Please ask them if they could advocate for the baby dolphins. You can call in English anytime. Many have 24 hour numbers.

If they don't have the telephone number to call off the hunt, you can give it to them.

The alternative to the killing is to hold a new vision for Taiji...a beautiful Taiji...maybe with wild dolphins happy to interact in the open seas.


Dolphins can be so forgiving.
They will help.
Give 'em a chance.
First, save their lives.

For the Taiji Dolphins!

Note: I am not a member of Sea Shepherd or Save Japan Dolphins, but I think they are doing a heck of a good job spreading outside pressure (gaiatsu) awareness to end the dolphin hunt. Please support the individuals using their own funds to get involved. Please support Japanese activist when you find them. They are ones who will end this. They are the ones who will create an alternative.